The only difference between repositories locally on your computer or on a publicly available server is that other users can see the repository that is on the server. There are many websites that can host your repository files and give you a public URI and Shell access, this will make a copy of your repository on an online server that other interested people can access.

Example websites include, GitHub, Gitlab and bitbucket and more. We’ll be using github, but they’re all somehow similar.

First, you have to understand some things, take a look at the following diagram: 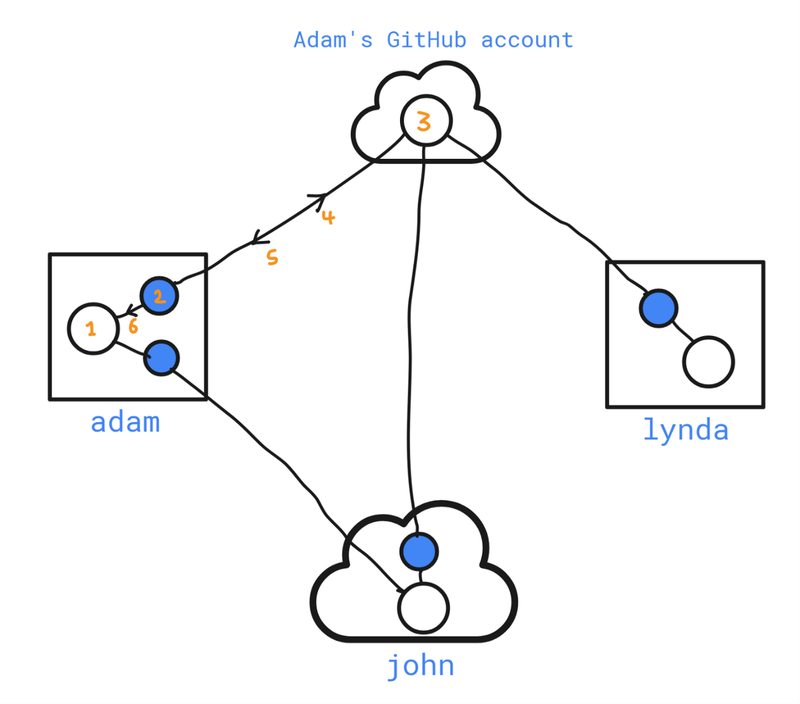 From looking at the shapes:

And from looking at the numbers:

Some notes and clarifications:

Note: I’ll be referring to the word “repository” as “repo” from now on.

by pushing we copy the commits from our local repo to the remote repo, at the same time, git also makes another branch on our local computer that is typically called origin/branch_name, origin is the name of the remote, demonstrated as the line in the previous diagram. And branch_name is the branch on the local mirror this branch references the remote branch and always tries to be synced with it. 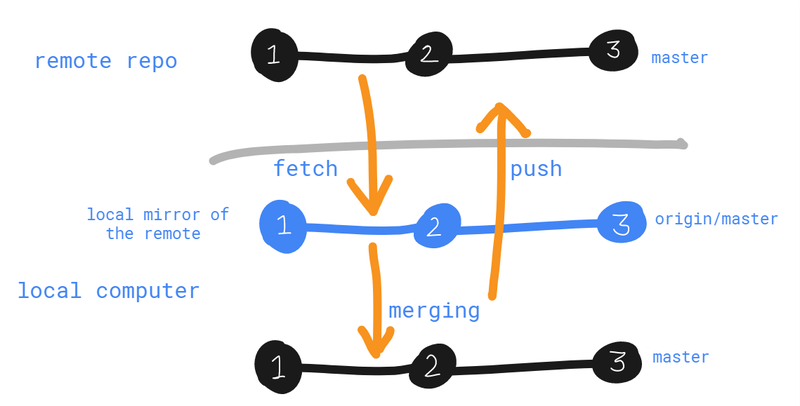 Hence: origin is the name of the remote reference pointing to the remote repo (it can have a custom name). Remotes are defined in the local .git folder and refer to branches in the local mirror, which has its own tree of commits cloned from the remote (github) repo.

The local repository and local remote mirror are not actually that separate, you will see that the commit nodes are note really duplicated, however the branch pointers have different values.

the above illustration is just to make things clear, it is not like that with all those commits duplicated, see below:

Now let’s follow some real example of pushing fetching and merging with remotes. We’ll start with the following states for the local and remote repositories:

If we now make local changes on our repo (like all the things we did before), and then commit the changes creating a new commit node, this will move the master branch to point to the new commit (HEAD will have a new value). But the remote\master branch (the local clone of the remote tree) won’t be changed. Look below:

Now we want to put the change we made to Adam’s github repo, so we make a push. What push will do is that it will:

sometimes the remote might be already updated with more commits from another source (like Lynda or john!). in this case git will notify us before pushing. And we will have to first fetch those changes and apply them to our local repo and then upload changes we made. More on this later.

Next, the remote repository was added a new commit (commit 5), this commit may be added by a push from another user on the network (maybe john or Lynda).

We make a fetch to get that change to our local repo, the origin/master is updated. but the master is kept the same, like so:

And to apply the changes to the local repo, we do a simple fast forward merge:

And finally the local repo is synced with the remote again. notice that the origin/master is just a branch but the only difference is that it always tries to stay in sync with what’s on the remote server.

Connecting with a github repo

To push a branch (master) to a remote repo (with remote connection “origin” already defined):

git push -u origin master. (it asks for github username and pass)

.git/config has the new remote UIR for the branch and in the remotes section and .git/refs/remotes/origin has all of the “origin” remote branches.

So we decided to collaborate on an open source project, let’s assume that we are one of the collaborators, the github repository is already there and we have the URI.

Locally we don’t have anything about the project (we don’t have a local repo). So we start form copying or cloning the remote repository first.

to get a clone of the remote repo, got to a directory that is not a git repo, then type git clone [remote repo URI] [(optional) a name for the directory other than the default repo name].

note: by default, the master branch is the one that is pulled locally, but you can specify which one.

This will create a new directory with the remote repo name, and inside is a git repository (local copy), that you can start working on, by creating new commits and pushing them.

We mentioned tracking before as a good practice when working on feature branches, we merge the master (or the originating) branch to get latest commits (that may be created by other contributors). This reduces chances of merge conflicts at the end, when the feature branch is complete and finally merged back into master.

However, when you create a new branch new_feature locally, it is not setup to track anything on the remote origin, this means if you want to upload that branch to the github repo with a push, and since your branch new_feature is not tracked with any branch on the local mirror, like origin/new_feauture, all commits on the branch won’t be pushed.

You can setup the new branch new_feature to be tracked in one of three ways:

Just do the same for new_feature

this will make another branch called origin/new_feature that will track new_feature and pushed to the remote repo as well.

Some guidelines on fetching

merging after a fetch

After fetching from the remote repo, and seeing the difference between the local branch, “master” for instance and the remote branch (in the local mirror) for example “origin/master”. After that we make a merge between the two, like so:

Note: git doesn’t allow us to checkout to a remote branch (select it), git is responsible of managing this branch.

There is a handy shortcut that combines both fetch and merge commands:

git pull is very convenient, but harder if errors arise, and often people misunderstand it and not knowing that it's a fetch and a merge, so you have to be careful about this.

Or with one step:

let’s say you are writing on the master branch and now you are ready to push to the remote server, so you have new local commits and there were also new commits added after you did your last fetch (by some other contribute), when you try to push git will refuse to push and will say that there are new changes to the remote repo that you haven’t fetched and I don’t know what to do.

The solution is to fetch then merge the new changes locally and then try and push again.

Adam wants to tell github to delete one of the branches on GitHub’s repository.

There are two ways, the old way and a new way:

using a colon: git push origin :branchX. this however does not delete the local branchX branch

using: git push origin --delete branchX, this will remove the remote branch origin/branchX and the local branch, and will remove it from the github repository.

I will demonstrate collaboration using github. The same works also for other services like gitlab and bitbucket and others.

You can create an account on github, they will give you a place to put your project git repositories so that it is available on a place where other collaborators can reach.

You can set access limits to your github repo:

If you have a github repo of some project you’re interested in collaborating to, then you can clone this repo and add your own changes. However, you don’t have write access to the repo and you can’t push right away, in this case you make something called a “push request” to the owner of the repo, then the owner can then decide to accept the push and merge the changes to his github repo.

forking a repo makes your own copy of the project on your own github repository which you will have write access to, then you make changes to that and at the end when you finish implementing your ideas, you issue a pull request on the original github repository. you create a pull request with a message stating what you did, and then they decide whether to incorporate the things you did to their repo and maybe accept your changes and incorporate them into the main project. they’ll grab your branch and merge it in. and at that point everyone will have access to your new feature.

A collaboration workflow: Joe and Lynda.

As a recap for git collaboration and with github, let’s follow up with this story between Lynda and Joe. Both already defined the remotes and has read/write access to the repository at github.

From Joe’s point of view

Joe wants to contribute to a project created by Lynda by adding a feature to her project, so he does the following:

From Lynda’s point of view

she does the following:

now Lynda sends an email to Joe to inform about the change.

if you’re using long git commands often, then you can create aliases or shortcuts with a custom name, much like Linux aliases. With the command git config:

now git st is the shorthand for git status.

You can set the aliases in any of the three git config levels (project, global or system).

The following is a list of handy aliases I use very often, which will make working with git easier:

just add them in the same way one by one, or just copy the following to your git config files: