There are different aliases and symbols to refer to a commit in the repository tree. For example:

By referring to different commits using an alias of the commits hash, we can actually browse the project’s files at that time.

The following commands list the contents of a commit snapshot:

Remember that you can always get more information regarding any git command with git help [command], see the output of git help log for example.

Following are different variations of getting the commit log:

to draw a really cool graph, shows the branches, use git log --graph

Now, this shows a lot of things in a practical way (really handy), using: git log --oneline --graph --all –decorate. I have created a git alias for this command (I mention git aliases later on). Since this command string is really long, and really cool and handy. I created a custom command, git log2. Where:

To examine a commit to see what was committed and what has changed in detail:

You can format the output for a more compact view:

for example, git show e4d1e94:.gitignore shows the content of the file .gitignore (the ignore file) on the commit e4d1e94.

And the following command shows all the files in a past commit: git show [Commit Hash]:.

When comparing commits, we actually compare two directories or a group of files, by using the diff git command.

the git diff command can do a lot more than just comparing the working directory, staging index and the repository trees, take a look at the following examples:

We previously talked about branches as they provide us a way to work within contexts. You can start a branch of commits from any commit node in the repository tree. branches are stored in .git/refs/heads/.

git branch shows a list of the branches we have on the repository; the current or selected branch will be marked for you in green. Always be aware of what branch you’re on before making a commit.

to create a new branch from starting from the HEAD commit node: git branch [branch_name], this only creates the branch and you have to switch to that branch to start working on it.

Note that switching branches has live effect on the working directory.

You can create and switch to a branch at the same time using one command using the –b option:

note: when you create a new branch it is extended from the branch you are already on, so be sure to move to the branch before creating a new one.

Remember that HEAD always points to the last commit on the selected branch.

To switch between branches, the working directory must be clean (or mostly clean)

if you have unstaged and uncommitted changes in the working directory, switching branches will wipe all that out

in this case you have these options before switching branch:

you can create a branch starting from any commit node in the repository tree:

git checkout -b testing_something [Commit SHA (the branch starts from this commit)].

git diff master..new_feature, this compares the tip (last commit) of master with the tip of new_feature branches.

git diff master^..new_feature~3, you can also do that. Not that a branch name can also be used as an alias for the branch’s latest commit.

git branch --merged shows the current branch, and other branches are included in the current green branch. Look at the following example:

to rename a branch, you have to move it to a new branch name using the –m option:

git makes the following checks before deleting a branch:

Branches normally end by being merged to the originating branch to make use of all the changes made by all the commits in that branch, but if you for example created a branch just to test some new feature and you changed your mind, you can always delete the branch.

When merging, first you need to switch to the receiver branch (the one that you want to merge into), with the command git checkout master. The do the merge with git merge new_feature. Take a look at this diagram:

now there is no difference between both branches and git diff master..new_feature returns nothing (no difference), and now you can delete the new_feature branch.

Note: remember to have a clean working directory before merging

In this case we want to merge branch_y into branch_x 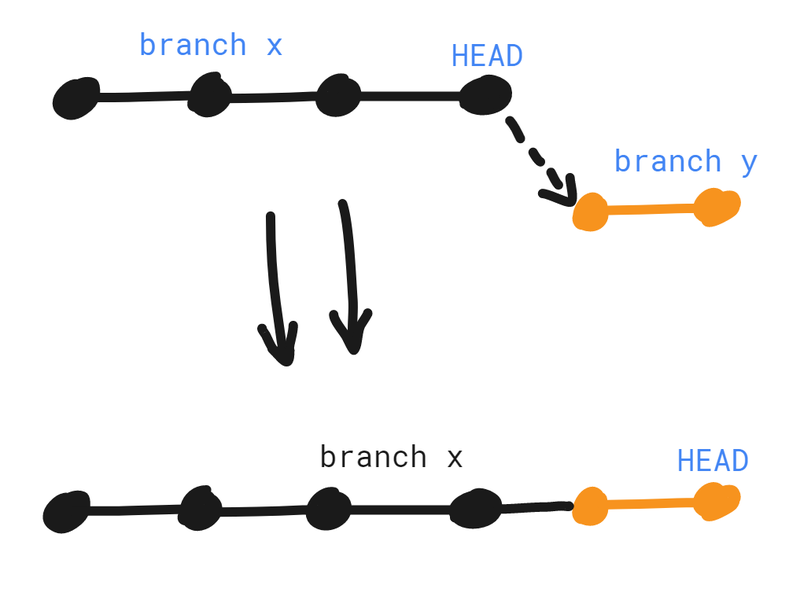 that is an easy merge. git looks at all the past commits in the chain of the branch_y branch and sees that it contains the HEAD of the branch_x (the receiving branch) and informs you that it is possible to do a simple fast forward merge like this. we don’t even need a new commit to do it.

you have the option to tell git to not use the fast forward way and create a new commit (just to make a record in the git log with a new messaged commit) using the option –no-ff: git merge --no-ff branch_name.

this always makes a new commit (at the meeting of the branches). git uses real merging if the receiver branch made new commits after from where the branch starts. HEAD of master is not an ancestor of the branch we want to merge. Look at this diagram again:

You make a real or true merge by the command: git merge new_feature.

Note: in most cases, git determines what way of merging to use.

Merging conflicts happen when there are two commits in two different branches having changes in the same line in a file.

For example, let’s assume there is a master branch with a number of commits. we now create a new branch and edit a file and commit, then switch to master and edit the same file at same lines and commit, after that we want to merge the new branch to master using git merge new_branch, this gives a merging conflict. It means that git can’t decide between both changes, what change to take in the creation of the new commit from the merging process?. And we need to resolve this manually.

After trying to merge with git merge, and had a merge conflict, you are now in a new area (master|MERGING) between the branches and you need to resolve. The selected branch appears in the terminal as $(master|MERGING) instead of just $(master).

When git says you have a merge conflict, you have 3 choices:

let’s get to each choice in detail.

git says you have a conflict between branches.

Then you run: git merge –abort. (To cancel the merge)

When conflicts arise after merging branches. If you inspect the file where the conflict happens, you will see some marks, added by git:

Note: you have to choose one change and delete all the git marks.

then do the commit with git commit -m "..." (you can just say here without a message as there is a standard message for the merge commit). After committing the prompt will return to be at the receiving branch $(master).

git mergetool --tool=”some_tool”. This opens a GUI tool to resolve the conflicts which is certainly easier.

In most cases you will be resolving conflicts in some IDE like Atom, Sublime, JetBrains IDEs and many others. They do this a lot easier form the UI context.

there are strategies and best practices you can take to reduce having merge conflicts in your code:

Note: in a git repository, you can branch out of any branch, and merge to any branch. There are no rules regarding the source or destination.

Note: after merging a branch, the branch still exists if you haven’t deleted it. And you can continue working (adding more commits) on an already merged branch.

The stash is a place where changes are saved temporarily without having to commit them. the stash is not part of the three trees we know in git, it is in a fourth area.

Changes we put in the stash are not commits but work in a very similar way, and they don’t have a Hash associated with them.

In most cases we use stashing when we are in a branch and make some changes to some file in the repository and now we want to checkout to master (another branch) without having a clean directory or making a commit. git will not switch to that branch unless we commit, discard or stash our changes, we are not ready for a commit yet so we stash the changes in a drawer.

You can save all current changes with git stash save “message”, this will save all changes in both the working tree and the staging index, and will make the working directory clean.

You can show all stashes with the command git stash list, this shows all saved stashes and it doesn’t matter what branch is currently selected. Each stash is stored with a name ([email protected]{0}) and a description of the latest commit when the stash was created.

For more details, you can show all changes made in a specific stash with the command git stash show –p(to show a patch display) [email protected]{0}(the stash name).

This is like doing the opposite of git stash save.

retrieving the stash changes will apply the changes to the working directory no matter the current branch is, of course like doing merges, in this case there may be conflicts that you need to resolve

after applying a stash, the working directory will have changes and won’t be clean, next you are supposed to continue the work and make a commit (or stash again!).

deleting items from the stash

to delete an entry in the stashing area whether you applied the stash or not, use the command git stash drop [email protected]{0} (the stash name). and to clear all the stash (delete all stash entries), use git stash clear. You have to be careful not to delete stashes that needed and aren’t applied yet.